For the End of Daze, half of me celebrated by chatting with a random stranger (Alex De Jong) from Rotterdam as part of the Odyssey Performance Festival for a Dutch Gallery.It turns out this stranger was a Buddhist (which I could surmise from his preferred avatar, "Lodro")...This performance was curated by Haglet (in Amsterdam?) and was called "Standing in the Grass" or something like that...I was merely participating...all I knew was that I would sit in front of a TV and chat with some guy for about an hour - preferable about today's doomsday (or lack thereof)...It looked like there were many levels of mediation - - including a tweet-wall and some other trendy elements.

Thanks to Liz Solo and Odyssey Island for inviting me :-) Stay tuned for the other half of me performing at 4 AM SLT from Australia..will only Aussies attend? We shall see...

Here are some more pics...I will comment on some of them below but I will not spend too much time on them..my RL self is going to attend some Doomsday Karaoke at Open Space Gallery :-)

Scroll down for pics...

So yeah, there was a clear line distinguishing fantasy and reality...lolz! I was not sure which side I was on..I guess Alex/Lodro was straddling both sides as his live streaming TV image was on one side and his Buddhist avatar strolled across the lines like he was on a Bardo border patrol...

Yes, this pic is Liz introducing us :-)

Here is a close-up of the curator (Haglet).

Just an audience shot..many friends were in attendance :-D 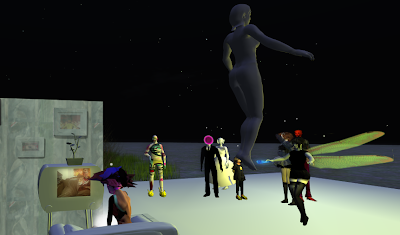 When the performance started, Alex was meditating so still, I thought he was a painted portrait at first...must have been the colour scheme! I thought maybe it was a jpeg texture and that the video was not streaming live yet...whooops!

As I mentioned earlier, there were many layers of mediation...hypermediation even more than remediation this time...At one point I asked Alex/Lodro if he received any super powers as a result of the 2012 ascension...I think he said he learned concentration...I learned how to speak to two people at the same time..almost telepathically ;-)

Here is an "Action" shot...Lodro is the Buddhist monk...I mentioned that my other avatar identity, Qyxxql has spoken with Buddhists before... 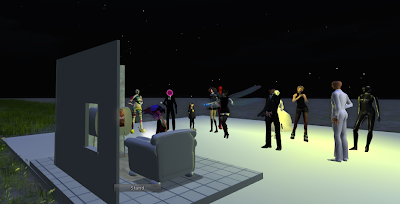 Yet another audience pic...

There was this cool "mayadozer" avatar...clearly "he" was cleaning up for 2012!

There was talk about getting our chakras or DNA re-tuned after December 21st..Ummm..you know what I mean, right?

By Zeus! Where did the lightning come from???

Lodro mentioned how both Second and First Realities were voids..seemed like a well attended void when I was there ;-)

.......and here are the only other events I had time to attend during today's festival...

I saw the Avatar Orchestra Metaverse stream their tunage.... 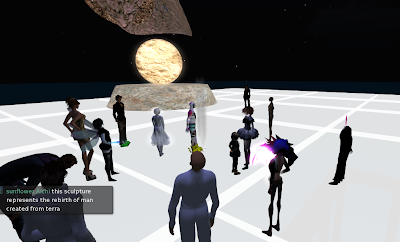 I also saw Tunisian artist, Wafa Borges present her terran sculpture based on Adam and Eve.